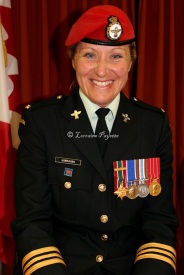 Major Vanessa Hanrahan came out to be Reviewing Officer

The Number 492 Military Police Canadian Army Cadet Corps presented a cheque for $200.00 to the Military Police Fund for Blind Children, an amount which was matched by Royal Canadian Legion Branch 92

(GANANOQUE, ONTARIO) The Number 492 Military Police Canadian Army Cadet Corps made sure they had all their boots spit shined, buttons polished, every hair in place and every uniform spotless as they came together for their annual parade and review at the Gananoque Recreation Centre on May 22.

“Major Vanessa Hanrahan joined the Canadian Forces in 1994 as a member of the Communication Reserves in Halifax Nova Scotia,” reads her bio. “Following the completion of her BA from Saint Mary’s University, in 1999 she component transferred into the regular force as a Military Police Officer. Major Hanrahan completed her Basic Military Police Officer’s Course at CFB Borden in 1999 and was subsequently posted to the CF SU(O) Military Police Company where she held positions as the Assistant Provost Marshal Security and Assistant Provost Marshal Police. In 2001 she was promoted to the rank of Captain.”

The Major had many accomplishments before heading to Afghanistan.

“In August 2010 Major Hanrahan deployed to Afghanistan as the Ofﬁcer Commanding for the Canadian Afghan Uniform Police Training Team, working to provide professional development to the Afghan National Police in the province of Kandahar. Upon return from deployment in August 2011, Major Hanrahan was appointed as the Commanding Ofﬁcer for 2 Military Police Regiment, responsible for the Canadian Army Military Police across the province of Ontario.”

In addition to having a complete review by Major Hanrahan, the cadets put on a tight and well ordered display of all they had learned over the past year. Although not a large number of cadets, they were still well disciplined and polished in their performance.

Police and Provost services have existed in many of the world’s armies since the time of Augustus Caesar (27 BC – 14 AD) or earlier. While relatively new to the Canadian Army, they were used to assist in managing the large armies that existed at that time, helping to keep order and deliver dispatches. The Canadian Military Police Corps came about during World War I in October of 1917, and were connected with the RCMP. Time passed, and in 1963 it was decided to amalgamate the Royal Canadian Navy (Shore Patrol), the Army (Provost Corps) and the Royal Canadian Air Force Police. These units came together to be the Military Police Branch.

Lord Strathcona, Canadian High Commissioner to Great Britain, sent a letter to both Sir Frederck Borden and the Minister of Militia and Defense in 1909 promoting cadet training in Canadian schools. He outlined his proposals and invested $500 thousand as a trust fund with the Dominion for this purpose. An important part of his plan included physical training for the cadets.

By the end of 1918, there were more than 64,000 cadets in Canada, and over 40,000 of them volunteered to serve. However, the end of World War I saw a loss of interest in the cadets on the part of government. Funding dried up, and many corps disappeared.

However, WWII saw a resurgence of interest, and between 1942 and 1945, 115,000 cadets were enrolled, and 124,000 ex-cadets volunteered for service. His Majesty King George VI conferred the title of “Royal” upon them, and they are now considered to be an integral part of the Canadian Forces.

While joining the Cadets does not mean enrolment in the Canadian Armed Forces, it does provide benefits and discipline not found in other organizations. And this evening was dedicated not only to a display of skills, but also to awards. This year’s recipients were:

It was with a combination of joy and sadness that RSM Andrews attended the ceremonies. As of this year, she has aged out of the cadets, but has signed on with the military police in hope of finding her career with them.
During the evening a presentation of $200 was made by the cadets to the Military Police Fund for Blind Children by the cadets, and a matching donation was made by Royal Canadian Legion Branch 92. This is one of their best beloved charities, and they go to great lengths to support it whenever possible. These funds will be used to help purchase eyeglasses for a 28-motnh old Kingston girl with very special needs. After 7 unsuccessful operations, she requires special lenses to help her see. The cadets were more than happy to contribute to this important cause.

“It takes a lot of family effort, it takes a lot of community effort to maintain a cadet corps, and I ask you to stand behind them,” said Major Hanrahan. “It is a fantastic opportunity for these guys to learn a little bit about the military and a little bit about life skills in general. There is nothing that they will learn in this cadet corps that will not benefit them as they go on in the future, and I think that it’s an excellent way to start out. Whether they end up like me, who made a career of it or if you move on into another area, there is not one skill set they will not be able to work from.”

To learn more about the Number 492 Military Police Canadian Army Cadet Corps or to enrol, please contact Captain Ron MacNeil at 613-539-2201 or Ronald.macneil3@force.gc.ca .