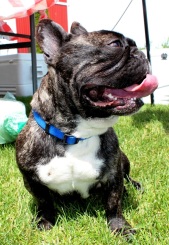 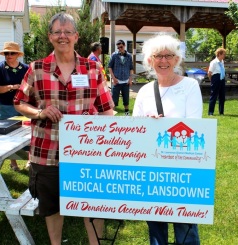 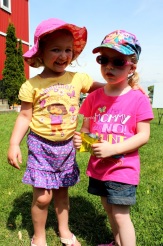 Annabelle and Abigail, both 3, enjoyed participating 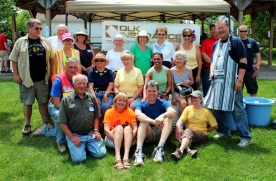 Volunteers got together to pose with the cheque for $4,036

(LANSDOWNE, ONTARIO) About 40 brave souls came out on June 1 and participated in the St. Lawrence District Medical Centre’s (SLDMC) first ever Exercise the Block event held in the village of Lansdowne on June 1.

“At this time, we have collected $4,036 from this one event,” said Heather Cross, President of the SLDMC.

The Centre is attempting to raise funds to complete a necessary expansion to its existing facility.

“Our fund raising goal over the next several months is $450,000.00,” said Cross. “This money will be sought through grants, municipal support, corporate and local business support, donations and events such as the one organized for today.

“This is our first major event organized by a group of volunteers who have taken up the challenge and established themselves as the Building Expansion Fund Raising Committee. These volunteers are working with co-chairs, Connie Zeran and Gail Holtved. They in turn report to our Past President and Chairman of our Capital Campaign, Brenda Duffy.”

The SLDMC has held several other fund raisers, including mailings to local residents. And the response has been good so far.

Exercise the Block took anyone who chose to come out, and let them do the route as they saw fit, whether walking, running, cycling, or though other creative means. After the participants arrived back at the Fairgrounds, Mayor Frank Kinsella of TLTI manned the grill to cook up burgers and dogs for all who wanted them.

“The next major event for our group of volunteers will be at the Lansdowne Fair in July,” said Cross. “By that time we will have some raffles underway as well as t-shirts and caps and other promotional items for sale. We will be here in the red building throughout the fair, selling tickets and products as well as speaking with folks about the expansion and of course happily accepting donations. Our thermometer has a long way to go but past experience in this community would indicate we can get there.”

For more information on contributing to the SLDMC or helping with fundraising, please contact Cross at 613-659-2669.