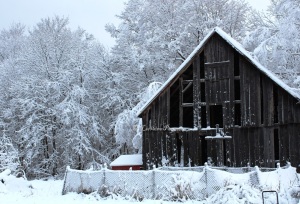 Freedom, yes, but probably not in the way you’re thinking. If life were that easy, I would never have thought to try a new column.

I woke up this morning with the hymn, “Enter, Rejoice and Come In!” clanging insistently in my head. We all get ear worms, but not that one, and especially not on first waking up. However, it felt like someone was trying to tell me something, and I’m trying to learn to listen.

When I went downstairs, I discovered that the ONLY in-use door to my house was jammed tight shut. It opens toward the inside, so it wasn’t a case of it being blocked by something – it was jammed in some other wonderful, frightening fashion.

This could be very nerve wracking, BUT I decided to keep my wits about me. Instead of getting claustrophobic and panicky, I decided to try every logical thing I could think of to get out. And if that didn’t work, then and only then would I resort to panic.

I tried tugging on the door, gently at first, then furiously, finally with a more scientific detachment. Careful observation showed that the problem was entirely at the bottom, which seemed to be wedged fast.

I sought (and found) several long thin objects which I then tried to slide around the door to find where the offensive item might be (this house is so old that a tiny, unnoticed piece of bark or pebble can lock that thing up tight). But I couldn’t find anything thin enough to get UNDER the door.

So the next step was to pop the hinge pins. After all, the TOP of the door seemed to be okay and twisted in my general direction, the sides appeared to be in order, thus logically, if the pins came out, the door should pivot back and hit me in the face.

The pins came out easily. The door, however, did not move.

I said “damn”, and a few other very choice things I’d been saving up for just such an occasion.

How to get out? Think, think, think… The other door would take HOURS to open (don’t ask – it’s always been like that), so there had to be another way.

Then I remembered the north window in the kitchen.

Thanks to my son removing and destroying my deer screens years ago because “they were ugly”, a large house-rubbing white tailed buck had totaled the storm panel on that one. It has never been repaired/replaced, so I have only the one single hung pane to deal with and a screen. The screen is the spline type, so I raised the window as far as it would go, popped the spline, and exited into the snow.

My dogs were NOT happy (to put it mildly), and immediately surrounded this suspicious extruder so I could be promptly and properly brought to justice.

After sorting all that out, I approached the door from the outside and gave it a good swift kick.

The door flew open, and it appears that not only had bits of mud, etc., got beneath it, but all the pretty snow from yesterday’s nor’easter had blown in and formed a tiny dam along the sill. This had been gradually melting in the night, causing the wood to swell up from the moisture, and then it froze again as the temps dipped, effectively locking me in.

Having now exhausted my supply of “why me?”s, I have moved on to working on drying out the door (like that’s going to happen in THIS weather!), and seeing if I can get some kind of mould killing leak seal paint (which may/may not exist). A couple of coats of that after planning the bottom a bit should (hopefully) help prevent this problem from happening again.

Now if I can just remember where I left my tools…