“I know the kings of England, and I quote the facts historical…”
– Major General, “The Pirates of Penzance,”, Gilbert and Sullivan

Rehearsal photos – The Very Model of a Modern Major General

(Gananoque, ON) Maybe that should be “facts hysterical” as the Thousand Islands Playhouse tackles that great piratical masterpiece, Gilbert and Sullivan’s “The Pirates of Penzance”.

Poor Frederic (Adam Charles) finds himself in a mess entirely thrust upon him by fate, something definitely not of his own doing but which may very well become his undoing. Fate first came upon him in the form of Ruth (Shelley Simester), a well intentioned but hard-of-hearing, ditsy nursemaid who only had his father’s best wishes and Frederic’s welfare at heart. Asked to apprentice him as a “pilot”, she mistakenly signed him up with pirates, to be indentured until his 21st birthday. But unbeknownst to Frederic, this doesn’t mean that when he becomes 21-years-old he will be free to pursue his own life – no, no, no! For Frederic was born on February 29, and that means his 21st birthday won’t come for decades…

So starts the most humourous tale of piracy to ever rock a musical stage. The cast of 14 portray brigands galore, as well as the Major General and his bevy of beautiful daughters, and the one and only American Coast Guard whose duty is to stop these fun-loving and endearing blackguards and restore law and order to the waters around 1920s Gananoque.

Gananoque? Yes, Gananoque! Gilbert and Sullivan have traditionally been modified by the companies producing their work, each making minor changes while taking nothing away from the overall story. Ashlie Corcoran, artistic director of the Thousand Islands Playhouse, participated in the changes and found it involved not only studying local history for the era in which the play was reset, but a lot of fun trying to stay in the metre, phrasing, language and pure genius of the original while still making it a more personal experience for Gananoque and Thousand Islands theatre goers. 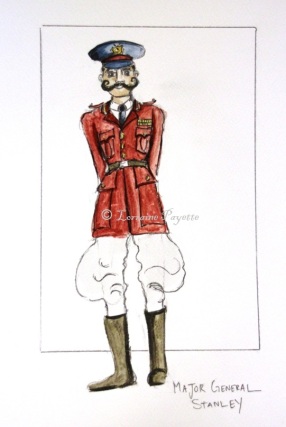 From a simple watercolour design sketch…

… to a fleshed out final product

Proper period costumes and sets always contribute to the flavour of a musical, and Drew Facey’s dazzling designs are brought brilliantly to life. From Major General to Pirate King, bathing beauties to Coast Guard, the costumes are fun, the colours lush, the mood delightfully fanciful. Put together with the sets and staging, the entire air becomes one of frantic fun and whimsy.

“The Pirates of Penzance” will be running at the Springer Theatre in Gananoque from June 19 – July 18. Show times are Tuesday through Saturday 8:00 pm, with matinees Wednesday, Saturday and Sunday at 2:30 pm (starting the Sunday after opening night). Tickets are $32 for adults, $30 for seniors age 65+, $20 for <30 Club, $16 for students, with a half price preview on June 19 (HST will be added to all prices). Perimeter seating is $27 and group tickets are available at $26 – $28 each. Running time for the show is about 2 hours and 30 minutes including intermission. This show is recommended for people of all ages. For more information, please go to http://www.1000islandsplayhouse.com or contact the box office at 613-382-7020.