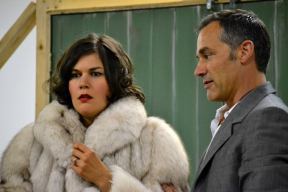 Krista Colosimo and Todd Thomson in rehearsal for Don’t Dress for Dinner. Photo provided by the Thousand Islands Playhouse

Kirk Smith and Todd Thomson in rehearsal for Don’t Dress for Dinner. Photo provided by the Thousand Islands Playhouse

(Gananoque, ON) Get ready for a spicy evening filled with nuance, double entendres and all your favourite tiddly bits as the Thousand Islands Playhouse happily brings you “Don’t Dress for Dinner”, a tasty little French farce with just the right amount of sauce.

Fans of 2013’s “Boeing Boeing” will fall in love with Marc Camoletti’s spin off. There are some familiar names and several familiar faces as the Playhouse once again works in cooperation with the Gateway Theatre of Richmond, BC, and Western Canada Theatre in Kamloops.

While the cat’s on holiday, mice have been known to get a bit frisky, and Bernard (Todd Thomson) is using his wife’s absence as an excuse to spend a delicious weekend with his Parisian mistress, Suzanne (Krista Colosimo). He calls on his friend Robert (Kirk Smith) to produce the perfect alibi, but when Bernard’s wife Jacqueline (Alison Deon) hears about this visit, she decides to do just a bit of playing on her own. Throw in a cook named Suzette (Tess Degenstein) and Suzette’s husband George (Beau Dixon), and you will be falling off your chair laughing as they try to get themselves out of trouble again and again.

Set in the 1960s, the play tackles life from a fun perspective. The translation has been carefully crafted to keep all of the humour, losing nothing in the shift from the original French to English.

“Our 2013 production of ‘Boeing Boeing’ was such a big hit with audiences that I knew I had to read the script’s spin off,” said Artistic Director Ashlie Corcoran, who is directing the production. “This script had me laughing out loud.”

As if a high quality comedy wasn’t enough incentive, the Playhouse is also hosting its annual Fish Fry Fundraiser on Saturday, July 25, at 5:30 pm. For $20 in advance ($25 at the door – prices do not include theatre tickets), you can treat yourself to Mike Mundell’s New Zealand Haddock, fries, a selection of salads and ice cream while listening to live music by Norbert LePage. A cash bar is available, and you get a chance to play Crown and Anchor or participate in the silent auction.

“Don’t Dress for Dinner” runs from July 24 – August 22, 2015, at the Springer Theatre, 690 Charles Street South in Gananoque, Ontario. Running time for the play is 2 hours, 10 minutes including intermission. Show times are Tuesday through Saturday 8:00 pm, with matinees on Wednesday, Saturday and Sunday at 2:30 pm (starting the Wednesday after opening night). Tickets are $32 for adults, $30 for seniors age 65+, $16 for students, with a half price preview on July 24. HST is applicable to all ticket prices. Group tickets are available at $26 – $28 each. The Fish Fry Fundraiser is separate and is not required for attending the play. This show is recommended for people of all ages. For more information, please go to http://www.1000islandsplayhouse.com or contact the box office at 613-382-7020.