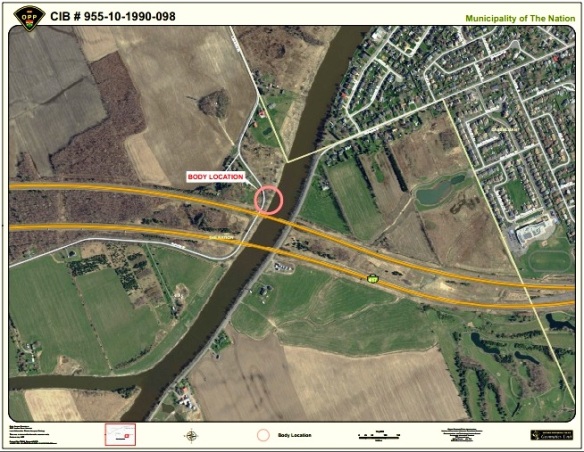 Aerial view showing where the body was found

“Her body was wrapped with two pieces of green cloth, two towels – one depicting an Irish Toast and the second displaying multiple flowers,” says a news release from the OPP.  “Additionally, a J Cloth, black coaxial cable and a curtain rod runner were with the body.  Her hands and feet were bound with neckties; a blue tie with small Canada flag emblems known as ‘the Canadian tie’, a blue striped silk tie and a red tie with yellow patterns.”

With no identification found on the body, she was called the Nation River Lady and has gone on to be one of Canada’s longest lasting mysteries.  A woman with the modern fashion sense of her day, her body was clothed in a long sleeved, navy blue body suit – a popular garment for women that came in many styles, all of which fastened at the crotch with snaps to keep the garment neatly tucked in.  The one she was wearing buttoned ¾ down the front.  She also had a complete manicure (both finger and toenails) with pink polish.  Her hair was naturally brown, but she had dyed it strawberry blonde.

She is described as being of slight to average build, weighing approximately 100 pounds (45.5 Kg).  Her body had a scar indicating that her appendix had been removed.  She had had considerable dental work and wore partial dentures, both upper and lower.

Yet with all this information about her, so many key things about the Nation River Lady are completely unknown.  Who was she?  What was her name?  Who killed her and why?

The killer in this case robbed her not only of her life, but of her identity as well.

Several articles have been written about her over the years, various bits of information released, all hoping to finally learn her identity and help bring the case to rest.  Going through them adds some legitimate information not listed in the latest release.

The items found with her tend to shed little light on where she came from, where she was killed, or why.  The “Canadian Tie” had three Canadian emblems on a navy blue background.  A souvenir item, it was made in Montreal and sold by various stores in the province of Quebec and in the eastern part of Ontario.  The coaxial cable that was found tightened around her neck was apparently manufactured in Renfrew, Ontario and distributed in the areas of Ottawa, Hull, Montreal and Brockville, with an article stating that it had a spatter of grey paint on it.  The tea towels and J Cloth found with her were common items found in many homes, as was the green, fringed cloth (which resembles a furniture throw or bedspread in the photograph provided).  The other two men’s ties were standard fashion items of the era.

Due to the science of the period, determining time of death was not easy.  It has been stated that she may have been killed in the summer or fall of 1974, then disposed of in the river.  Winter conditions could easily have kept her from being found until late in the following spring.

OPP Forensic Artist/Reconstruction Analyst, Provincial Constable Duncan Way has used advanced modern technology and created a three dimensional clay facial reconstruction of her.  Viewed from several angles, it will hopefully remind someone of a person they knew and cared about more than 40 years ago.

She was someone’s daughter, and may have been someone’s aunt, cousin, sister, or wife.  One article claims that her body showed no signs of ever having had children.  She may have come from the Town of Casselman area, or she may have been from farther away.  Was she someone’s best friend, someone somebody didn’t think could possibly be dead?  Was there no one who missed her?  Does anyone recognize or remember her at all?

Hope was kept alive as long as possible before her body was interred in a Toronto cemetery in 1987, marked only with a numbered metal plate.  But now, with advanced technology, there may be a fresh chance to solve this case.  Her DNA and fingerprints are on file, and with public cooperation and assistance it may be possible to finally at least bring a name to one who has been without one for so long.

“The Criminal Investigation Branch (CIB) investigates major crimes including homicide along with death investigations on behalf of the Office of the Chief Coroner for Ontario,” says the official release.  “The Missing Persons Unidentified Remains Unit (MPUB) is dedicated to assisting front line police officers with missing persons and unidentified human remains investigations.  A partnership between the OPP MPUB unit, the Ontario Forensic Pathology Service (OFPS) and the Office of the Chief Coroner (OCC) has existed since 2006 and we work together to locate missing persons and give a name to unidentified remains.”

With this aim in mind, they have once again reached out to the public for help in the Nation River Lady’s case, bringing out the physical evidence and making it available for scrutiny.  Cases like this are never closed until they are solved, no matter how long it takes.

“Under the direction of Detective Inspector Daniel Nadeau of the Criminal Investigation Branch (CIB), detectives from Russell County OPP and East Region Criminal Operations have been reviewing the evidence and exploring investigative options,” says the release.  “Ontario Provincial Police are seeking the public’s assistance and ask that if you have information that may help identity this woman or to find the person(s) responsible for her homicide that you contact the Ontario Provincial Police at 1-888-310-1122 or the Nation River Lady dedicated tipline at 613-591-2296.”