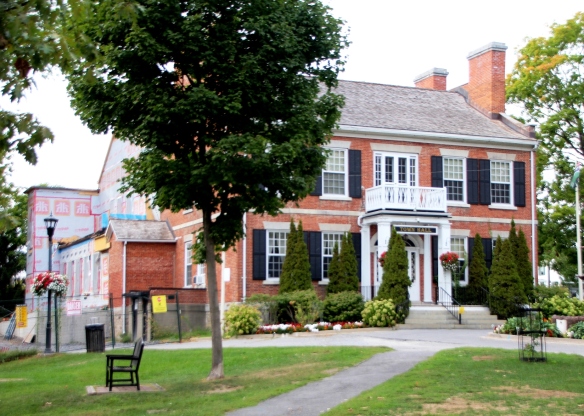 Gananoque will have five candidates running for mayor and 14 for council in the upcoming municipal elections. Lorraine Payette/For Postmedia Network

(Gananoque, ON)  With the municipal elections coming up on Monday, October 22, signs are sprouting up all through the town.  This year, five candidates are running for the position of Mayor of Gananoque, with another 14 running for Town Council. The mayoral candidates are John Beddows, Brian Brooks, Jim Garrah, Ted Lojko, and Christine Milks.

“I believe that the Mayor of Gananoque must be a representative of the entire community,” said Beddows. “I believe that at its essence, the Mayor’s responsibilities boil down to two basic actions – listen, and act. First, listen. Request and seek out input from across the community on issues of personal or general concern. Encourage public debate and be transparent in your thoughts, conclusions and the facts which support them. Second, act. The Mayor is the leader of the Council, and in many ways first amongst equals there, but the Mayor has a critical role in shaping the general thrust and options Council considers in order to act collectively in the best interests of the Community.”

Beddows feels that the economy is the most important issue for the Town to focus on at this time. He sees a need “to attract new investment while sustaining and providing the space for our economic sectors to evolve, maintain profitability and contribute to (this economy).”

“I have enjoyed my past four years on council and am very proud of the positive changes that have taken place during that period,” said Brooks. “I strongly feel that our town is really coming alive… Just look at the traffic on our streets these past few years. The near full to capacity of many of our hotels/motels over the summer months. The number of new businesses that have opened up – over 12 in the past few months alone. Empty stores are disappearing for our streets. New homes are being built and not just condos. I want to be Mayor to ensure that this momentum continues.”

Among other initiatives, Brooks would like to “establish pod- casting of all council and committee of the whole meetings allowing those who cannot attend the meetings to view them live or at a later date, on the town’s web site.”

“I know that council can have a positive impact on the quality of life for residents and visitors,” said Garrah. “One of my goals will be to encourage everyone including all our employees and citizens to embrace the idea that by working together and sharing ideas our community will be a better place to live, work and visit.  I want decisions to be based on data and facts as well as an understanding of the positive and negative outcomes of the decisions. Over the past eight years I have attend all but four or five council meetings. Council has gradually changed the operating procedural bylaw in a way which has made it more and more difficult for citizens to participate and ask questions which are important to them… I want to make it easy for citizens to share their ideas and concerns.  I want the decision makers to realise that the consequences of decisions in some instances will be felt well beyond a council’s term of office.”

Garrah feels that fact based decision making just makes good business sense and it is important to listen to the tax payers. “Council (must) give them good value for their taxes in providing what are to be considered core services like road maintenance garbage collection, snowplowing safe drinking water etc. (while) increasing residential and commercial development (which) will help in sharing the costs of services and provide more opportunities for employment. Making the town more accessible will improve the quality of life for everyone

“As a business owner of Turtle Island Bed and Breakfast and a local resident I have watched the Town Council make decisions without any involvement of the local community.  Property Taxes are one of the highest in Ontario,” said Lojko. “And Town Council has made decisions that do not benefit the local residents and are not transparent. I decided to run because it is time for a change. It is time for younger councillors with fresh ideas to represent their neighbours and to bring fresh and energetic ideas to City Council. We need to move forward and stop talking about what use to be….and start a dialogue what could be. I as Mayor want to make sure that new councillors are elected and new councillors work with local residents to provide the services and vision that makes Gananoque vibrant.”

Lojko would like to concentrate on jobs and investment, increasing tourism, supporting local business and providing proper affordable housing and services for residents.

“I am a Gananoque native raised with a strong sense of community and service,” said Milks. “You do what you can for others because you can, because you should…we’re all human beings deserving of respect.”

Milks has a strong history as a local business owner as well as working as an office administrator for a firm employing more than 30 people. She has been an advocate for Children’s Mental Health for many years, served on the 1000 Island Gananoque Chamber of Commerce, elementary & high school parent councils, and the Gananoque Police Service Board. “I believe strongly in local policing, a community that works together, a community where all views are respected and considered, a community that works for all of us.”

In order to make sure that everyone is as well informed as possible prior to the election, All Candidates Nights will be held by both the Chamber of Commerce (September 26 (council) and 27 (mayoral)) and the Rotary Club (October 3 (mayoral) and 10 (council). Candidates are using as many means as possible to get the word out, including social media and personally conducted meetings. Take the time to study the issues, learn about the people who are running, and vote from an educated perspective.