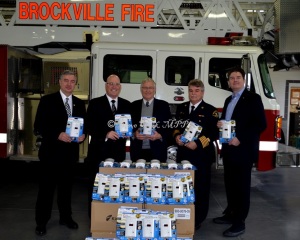 The Insurance Bureau of Canada donated 65 carbon monoxide detectors to the City of Brockville Fire Department on Tuesday, January 14 in an event to promote the use of the life-saving devices and passage of PC MPP Ernie Hardeman’s Private Member’s Bill mandating them for all Ontario residences. Pictured from the left are: Brockville City Councillor Mike Kalivas, Leeds-Grenville MPP Steve Clark, Oxford MPP Ernie Hardeman, Brockville Fire Chief Chris Dwyre and Doug DeRabbie of the Insurance Bureau of Canada.

“You can’t see, smell or taste carbon monoxide; the only way to know if this deadly gas is in your home is by having a detector,” said Clark. “I want to thank the Insurance Bureau of Canada for making this donation to help protect the people of Brockville.”

The Insurance Bureau of Canada (IBC) made the donation of carbon monoxide detectors to Chief Chris Dwyre of the Brockville Fire Department as part of its campaign to raise awareness about the need for carbon monoxide detectors in all homes with a fuel burning appliance or an attached garage. The Insurance Bureau has already donated approximately 1,000 detectors to Ontario fire departments.

Over the last 15 years, 250 Ontarians have died from accidental carbon monoxide poisoning.

“Despite the serious threat of carbon monoxide poisoning, many Canadians do not have CO detectors in their home,” said Ralph Palumbo, Vice-President Ontario, IBC. “We thank MPP Ernie Hardeman for his leadership and perseverance to make CO detectors mandatory in all homes in Ontario. Imposing the installation of CO detectors is a wise investment that will help keep families safe at a minimal cost.”

On December 12, 2013 Hardeman’s Private Member’s Bill to require carbon monoxide detectors in all homes received Royal Assent, the final step in becoming law. The bill was named the Hawkins Gignac Act in memory of a Woodstock family killed by carbon monoxide poisoning due to a blocked vent on their fireplace.

Although it had unanimous support in the Legislature the bill had to be introduced five times and took five years to pass. The government is working on creating regulations to establish standards for detectors which are required before the law can be fully implemented.

“Carbon Monoxide poisoning is the leading cause of accidental deaths in North America, but many of these tragedies can be prevented by installing a CO detector,” said Hardeman. “It is particularly important in the winter months to ensure your family is protected by making sure vents aren’t blocked and that you have a functioning carbon monoxide detector.”